You Need A Budget is an online subscription-based budgeting application that I’ve been using since mid-2015. It’s incredibly helpful in maximizing savings and reducing the guilt in making large purchases, among countless other things. Reddit user doctors_like_cash was looking for a way to email a weekly summary of activity by category, so I whipped up an example using Google Apps Script, which allows you to excute code on a schedule without having to host a server or run anything locally.

You will need to have a Google/Gmail account for this to work, since Google Apps Script uses your Gmail account to send the emails. You will also need a YNAB account, of course.

Replace the contents of the default Code.gs with the following script. One of the things the report does is go into your Gmail inbox and mark the message as unread. This is necessary if you’re sending to and from the same address, since Google will automatically mark the received message as read. If you’re sending to a non-Gmail address you should remove lines 71-80.

Due to requests from various users on Reddit, I have provided a few alternative scripts that change the way the reports are specified and reported on.

Fill in these fields with your own details:

From the Select function dropdown, choose the sendYnabReport function, then press Run (the play button). 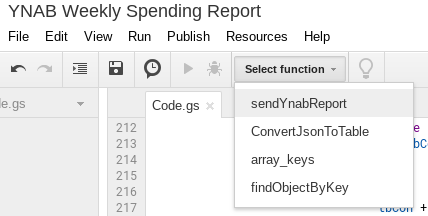 You will need to authorize the project to do a few things: 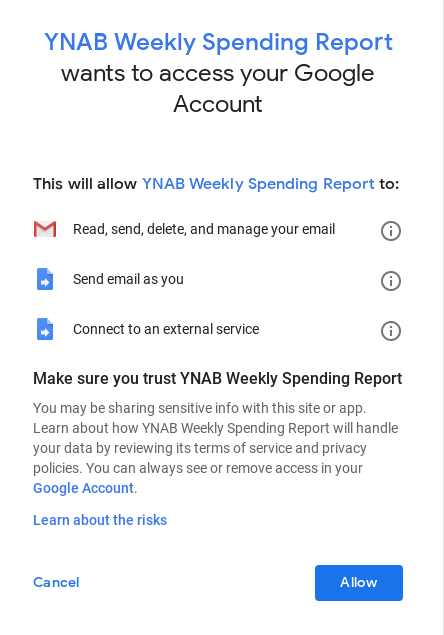 After authorizing the project, you should receive an email that looks like the example at the top of the page.

All of this is great, but now we have to schedule the script to run weekly.

Click the timer icon and create a new trigger. I’ve setup a weekly trigger that runs every Monday between midnight and 1 AM.

And that’s it, now you should get a report every week on your spending habits.

I encourage you to dig through the code and look into adding more columns, links to categories, etc. The opportunities are endless.